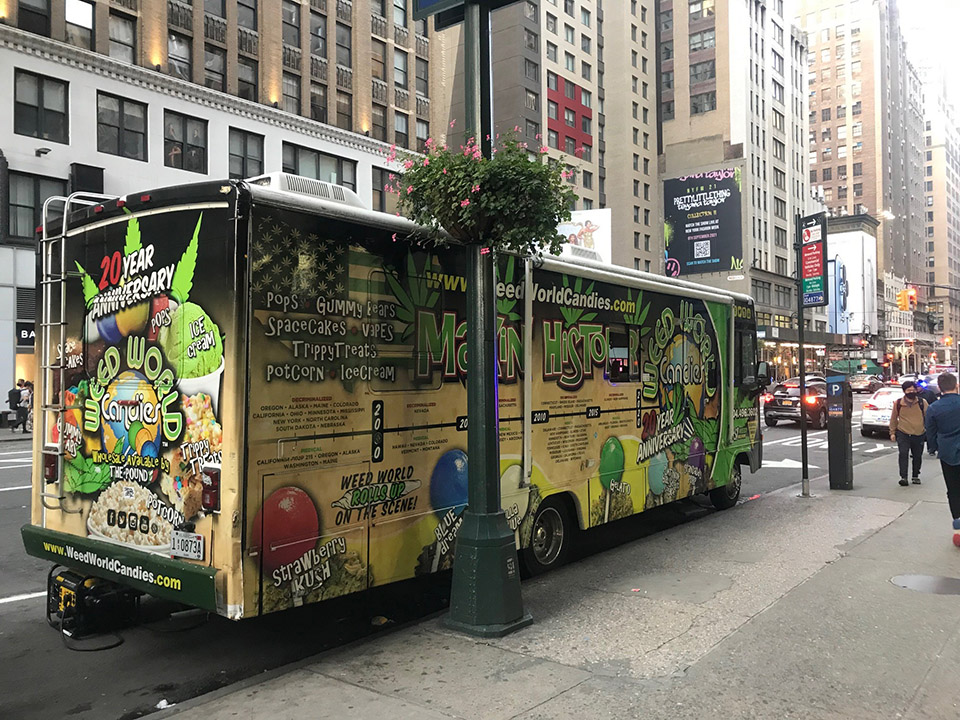 Ah, my beloved New York City – how it changes and evolves, ebbs and flows, makes it through traumas and world events and always comes out somehow stronger and more vibrant than ever. It is still the greatest city in the world, even though it’s been in some real dusts-up lately.

As a never-smoker of any kind, I have asked myself for years why tobacco is even still legal. And I know the answer is somehow linked to the founding of our country, international commerce and exports, and our so-called freedoms of choice.

But we all know (those of us whose headspace does not reside permanently under a sand dune) what tobacco and nicotine do; smokers even know the fate that almost certainly awaits them and their chemo dealers. For the lucky ones – who play the “why do some people get lung cancer but others don’t” game – it is still at best Russian Roulette and the IV will one day probably drip for them, too. And for those of us breathing nearby.

I am not even sure why smoking is considered some kind of civil right. It violates the civil rights of non-smokers. On the other hand, I just broke my last glass mercury thermometer – Made in the USA and I still prefer these streamlined wonders – but they are apparently banned forever by the less powerful mercury lobby. However – cigarettes, cigars, spliffs and joints carry on spreading illness to the masses and revenue to all the commercial entities who benefit. And so it goes …

But merely relegating smokers in NYC to standing outside a building or using their “private” balconies hardly keeps their smoke out of my lungs, or the unpleasant odor from creeping inside my apartment. And New York isn’t really known for its “fresh air” in the first place (with a resulting, eponymous philanthropic fund formed just to get kids out into it away from the City).

Instead, it used to be for me, living in close proximity to Central Park, that there was always one fine day every year, when the temperature rose to just warm enough to send the wafting, unmistakable odor of carriage horses and manure nearby, when I would breathe in deeply and smile to myself, “Ah, Spring is the air.” That was the giveaway of reawakening, and New York always gladdened my heart.

But now, Spring and the rest of the seasons have melded into one horrible pervasive stench of “skunk”. Yet this is progress, I am told. And meant to make New York more fun, tolerant and profitable. But in these post-Covid, respiratory-conscious times, is this really what we need to get New York back on its feet? Because I just see a lot of people off their feet, and off their heads, and I am thinking that this is not the New York I’ve loved for so long, the New York that offers so much more than being able to get high without a trip to the pokey.

Look – It is thrilling that New York has come back to life and there are people enjoying being out and about again, and back inside cultural venues. It’s good for everyone, it’s good for business – it’s good for my real estate business.

New opportunities are opening up all around – and this could be a call to weed entrepreneurs everywhere: Come up with some odorless delivery method (in addition to new bakeries and new calories); maybe they exist already? Or just figure out a way to corral the smokers into some big empty retail spaces (now there would be a profitable repurposing of storefronts and empty offices – a new high for commercial real estate) … and just let the sun shine in. It could be a big mellow party all the time, and the rest of us could go back to walking the fab streets of New York, enjoying the sweet smell of manure. 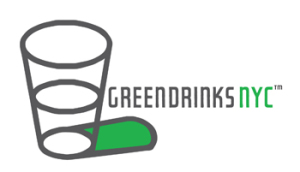 As a freelance writer, and a real estate agent investigating and facilitating the selling, buying, renting, and leasing of residential and office space … it’s always an unexpected pleasure when my various pursuits intersect fortuitously, as they did recently when I was invited to an event hosted by Green Drinks NYC at the showroom of Resource Furniture.

Founded in 2002 by Margaret Lydecker, Green Drinks NYC calls itself “the largest environmental networking organization dedicated to unifying the sustainable community in NYC,” hosts monthly events, and has over 15,000 members. Indeed, this socially conscious company (and local satellite of the international Green Drinks) has become a kind of unique meet-up and movable cocktail party for environmentally savvy revelers and entrepreneurs — including architects, interior designers, product designers, engineers, artists, academics, retailers, real estate movers and shakers … and their concerned clients … among other citizens from all walks who are trying to change the dialogue about industry and modern living, as they change the world.

And which no doubt inspired Green Drinks NYC’s association with Resource Furniture. Since 2000, Resource has been in the vanguard of importing and distributing inspired furniture from Europe, with showrooms in New York and several major Canadian cities. Owners Ron Barth and Steve Spett have also been in the forefront, especially of late, working closely with developers in NYC, suburban NYC, and other cities, and playing a central role in the current discussions spearheaded by Mayor Bloomberg’s adAPT NYC program for building micro-apartments. Resource is also sponsoring the Museum of the City of New York’s exhibition “Making Room: New Models for Housing New Yorkers,” which showcases innovative design solutions for small apartments, including a 325-square-foot room model (“a size prohibited in most areas of the city”).

Because let’s face it … Unless you are in that rarefied percentile of New Yorkers whose dwellings come with cool seven-, eight-, and now even nine-digit price tags — and the corresponding breadth of gracious living — we live in a shrinking city in search of where the heck to put all our stuff. 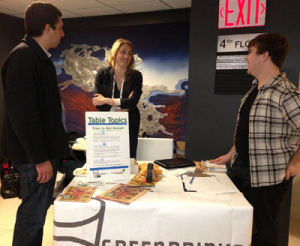 In the course of my work, I often look at apartments, or even single rooms within larger spaces, that are size- and shape-challenged, and am asked by clients and customers to make suggestions. While there are many tips for making small rooms look larger, such as picking correctly proportioned furniture, creative lighting and the thoughtful use of paint, artwork, and so on, the most important thing one can do for a small space is to purge the clutter, of course. However, artistic types, frequent travelers and collectors such as myself know that that is so much easier said than done. Nevertheless, fond memories and fabulous “finds,” or not, sometimes you just have to face the great New York City trade-off and send your treasures on a permanent vacation elsewhere. 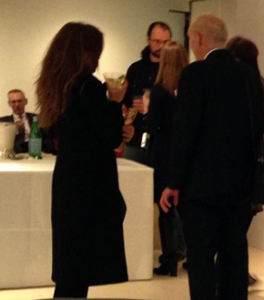 Yet, really, the best and most encompassing solution I have found for smaller spaces — i.e., for those people not capable of some OCD version of “nothingness” Zen — is to find a way to have a place for everything, and everything in its place. Which, for me, means only one thing: clever “furniture systems” with innovative storage.

So I was delighted to discover that Resource Furniture lives up to its name with the sort of creative pieces I have always utilized since I moved into my own, very first NYC apartment as a student: furniture that can multi-task. A design concept pioneered by companies like Murphy Bed, which is still in business and still popular today over a century later … along with many off-shoot design companies and alternative and evermore sophisticated mechanisms … Resource stands out on the high end with fresh, sleek gems of form and function. 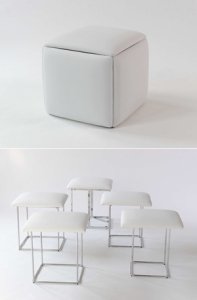 Concealed beds reveal sofas and libraries and desks when not in use, tables “rise to the occasion” or stretch beyond their initial slim impressions, “walls” become bunk beds, chairs so elegantly thin and compact they take up a fraction of space when hung almost as “wall art,” and so many other very cool and versatile products … Frankly, I would simply adore these pieces even if space were not an issue. 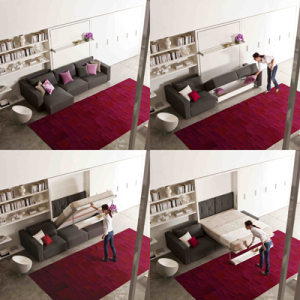 And for some, like the evening’s guest speaker, Graham Hill, who has used Resource to furnish his own apartment, living “small,” “clean,” and “reducing one’s footprint” is a mission. A successful businessman in several fields, who opted out of corporate life and conspicuous consumerism, founded TreeHugger, moved to New York, bought a couple of small apartments, and later founded LifeEdited, Hill gave up his more expansive lifestyle and opted for sizing down only to what he really “needed,” and now devotes himself to inventing new products, creating new buildings and apartments, and teaching the world about existing more efficiently. And how much fun it can be (he says)!

This all sounds wonderful when you have the luxury of actually choosing whether to live in a small apartment or a city palace. However, try convincing the average New Yorker already existing inadequately in a “micro” New York apartment with a cramped, reduced quality of life that sizing down even further is the way to go. A New Yorker might tell you — in more colorful language — that the only advantage to reducing your footprint is if you’re Sasquatch and you forgot to turn off the Location Tracker on your iPhone. 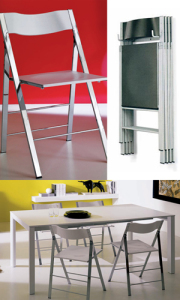 Yes, I’ve lived in big, and I’ve lived in small, and let me tell you — no matter what anyone says — big is better. Real breathing room and light and quiet and air and views and gardens count. And closet space! Lots and lots of closets! Not to mention that elegantly engineered chic does not comes cheap — high art never does. But as micro-apartments take shape and wend their way through city planning, “high concept” furniture and products will not only be considered ingenious and chic — but absolutely necessary. Never mind that, ultimately, it might be just an ironic trade-off: expensive solutions instead of expensive, larger apartments.

Still, with so little inventory on the market, New York is in dire need of more apartments and more affordable living, especially for groups such as the city’s “artist class,” which has always given New York so much of its lifeblood and edge … and finds itself all but forced out of town in search of less costly live and work space. That alone is changing the dynamic of our city, and not for the better. 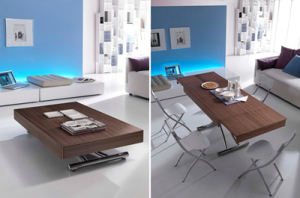 So make no mistake: the day of small is looming big, my friends — one can see the writing on the (movable) wall. Fortunately, though, in this changing landscape, we have companies like Resource to help make the inevitable compromises and sacrifices a whole lot more appealing — and organizations like Green Drinks NYC to help ease the pain with cocktails, hors d’oeuvres, and stimulating conversation with leaders of this brave, new, environmental avant-garde … and interesting, passionate, likeminded fellow travelers with energy to burn.